What is the NCEA Change Programme

We’re in the process of strengthening NCEA by making a series of changes to improve well-being, equity, coherence, pathways and credibility – for students and teachers alike.

The changes, which were confirmed by Cabinet in February 2020, will be the most significant reform of NCEA since the qualification was introduced in 2002.

In light of feedback from key stakeholder groups – those who undertake NCEA (learners and their parents/whānau), those who deliver NCEA (school leaders and educators), those who administer the qualification (NZQA) and those who use the completed qualification (employers, tertiary providers, iwi, etc) – we will be working to ensure we implement the NCEA changes in a way which is responsive to the diverse and evolving needs of our education system and communities, and recognises the complex nature of NCEA.

We will also provide the best resourcing, tools and guidance, minimise disruption to learning programmes as much as possible, and continue to engage with New Zealanders as we implement the changes.

The NCEA Change Programme is a work programme led by the Ministry of Education to deliver the package of seven changes aimed at strengthening NCEA:

The changes were informed by insights and feedback gathered during the public engagement on the NCEA Review in 2018, and were confirmed by the Government in February 2020.

Thousands of people across the country took part in the Review from May to October 2018 and provided feedback in different ways – including Quick Survey (6,758 people); workshops, fono and hui (8000+ people); NCEA and Big Opportunities Survey (920 people); 54 focus groups (493 people); 20 regional workshops (476 people); and submissions (155 individuals, 116 groups and 95 organisations). An overwhelming majority favoured changes to strengthen NCEA.

The Ministry of Education is working with schools, young people, families/whānau, communities and other key stakeholders to deliver the NCEA changes. The changes are scheduled to be phased in over six years, with new achievement standards at Levels 1, 2 and 3 in place by January 2026.

Title:
Changes to Strengthen NCEA
Description:
Here from the sector about the key goals in the future of the qualification
Video Duration:
4m
Vimeo ID:
649775833
Video URL:
https://player.vimeo.com/video/649775833
Transcript:

It's time we had a look at NCEA because it's a qualification that's been around since 2002. And it's a great qualification, it's really well respected nationally, but we can make it better.

Making NCEA more accessible is one of the key changes so that involves  making sure that all students have access to it. And accessibility isn't just about financial accessibility; it's also about making sure  that students who have different learning needs are still able to access the standards and there aren't things that are stopping them able to demonstrate what they know how to do.

So one of the changes that we had to make for NCEA was to strengthen numeracy and literacy standards and that was because students were leaving school without being literate or numerate.

So there's going to be literacy and numeracy co-requisites for NCEA and what that means is  these credits will sit outside the 60 credits that are required for each level. Students can gain these credits anytime from Year 9 right up until they leave school.

Having fewer larger standards is one of the key changes and it's created  quite a lot of discussion amongst many people. The feedback that was received from students, teachers, and families  was that students were doing too much assessment; they have been doing too much assessment. Focusing on that, the learning hasn't been so important and it's really been getting in the way of students' well-being and students achieving well.

We need to simplify NCEA's structure, by having 60 credits required to pass at each year level and not carrying credits over from one year level to the next. By focusing on quality and not quantity , that's a positive change as well. Students don't need 200 credits at Level 1 and a similar amount at Level 2.  The quality of the credits is more important, and by limiting the number of credits that can be accumulated year on year then everybody is sitting the same number of credits and it means students can concentrate on trying to get as many credits endorsed as possible.

One of the big changes that we'll see is students having clearer pathways,  whether it's to further education, work, or training. It means that students will know fully that they're on the right track.

One of the challenges that we've heard is that for many students they have had courses that may or may not have led them to where they wanted to go, so it's been really important to develop clear pathways that students understand  and so do their teachers.

Keeping Level 1 NCEA as an option is something that's come out of this review. And that Level 1 qualification is going to be a broad, balanced, foundational qualification with the changes that are coming in, and it's up to schools individually whether or not they want to  have their students sit Level 1 NCEA in Year 11.

These changes are going to come in over a period of time so we'll be piloting the Level 1 standards and then they'll be implemented. We're taking time over this to make sure that we know that we're getting it right, thoroughly testing things in schools before they go out to teachers.

We have been working in partnership with teachers, students, school leaders, parents and whānau, and other representatives from the sector to implement the changes to the NCEA. The new standards are scheduled to be implemented in 2024 (Level 1), 2025 (Level 2) and 2026 (Level 3).

We also want to ensure everything we develop to support the NCEA changes will meet the five principles of a strong NCEA qualification – coherence, credibility, equity and inclusion, pathways and well-being.

Following sector feedback, and advice from the Ministry of Education, NZQA and his NCEA Professional Advisory Group (PAG), the Minister has announced that the NCEA Change Programme will be rephased over an additional year to support the sector.

Please note: additional refreshed information on the NCEA Change timelines is forthcoming and will be uploaded on this page. 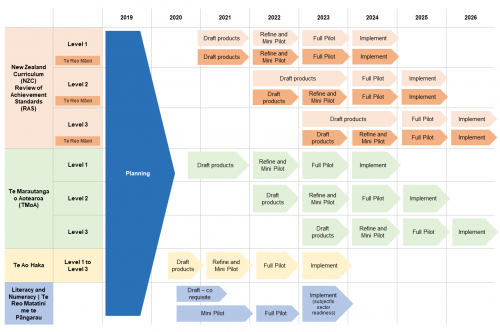 What is not changing?

Where to go for further information

All other questions can also be directed to the team via NCEA.Review@education.govt.nz

As part of Change 2 of the NCEA Change Package, Mana ōrite mō te mātauranga Māori, we are working to ensure there is equal status, support and resourcing for mātauranga Māori in NCEA, opening up greater opportunities for ākonga to access mātauranga Māori and the pathways that lead from it.

This includes our Leading Local Curriculum Guide Series which will help you steer your view of your local curriculum. This series supports you to lead discussions with your staff or within curriculum or year groups on:

The Professional Advisory Group, composed of current and former principals and teachers, was established to provide advice to the Minister of Education and the Ministry of Education on the NCEA Review.

We want to ensure everything we develop to support the NCEA changes will work in practice and meet the five principles of a strong NCEA qualification – coherence, credibility, equity and inclusion, pathways and well-being. To do this, we are working in partnership with a diverse range of people to implement the NCEA Change Programme.

We have established four NCEA panels to ensure a diversity of New Zealanders — Māori, Pacific communities, people with disabilities, and industry and vocational employers — have a voice in the design and implementation of the NCEA changes.

What do the NCEA changes mean for employers?